My Experience with the Parrilla Boys 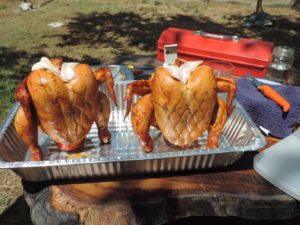 A couple of years ago ,  while in between beers and talking with friends, a business was born: And what if we participate in the BBQ Fest?

So, that was how Eduardo and Raúl  passionate for grills started what is now a small business called Parrilla Boys. They specialize in informal barbecues with delicious recipes using quality products.

I was invited to a barbecue and was absolutely fascinated , and as well were the judges from the BBQ FEST weeks before, who by the way wereawareded a price for their techniques on smoked chicken.

What do we needed to make this incredible recipe?

The most important thing is to have a grill (smoker) and a lot of patience.

The grill is turned on an hour before the chicken is introduced, so that its temperature reaches 250 ° F. At that time, take a a sharp knife and peel off the whole chicken’s skin. Once chicken is clean and without the skin, is marinated with a special mustard, tomato sauce, sesame oil , honey and salt.

Once the grill smoker has reached its temperature, the chicken is introduced and you close it down so that it can start smoking for a whole hour. Then, is taken out to dressed with rashers of bacon holdeding it with toothpicks. Immediately, we proceed to brush it and varnish it again with the marinade. Then you lay the chicken on top of can of an open beer, and put it into the grill again but this time inside a pot, so that all the juices released reamain inside the pot. It stays there for an hour and a half . We must be careful not to open the grill during that time so that it doesn’t lower it’s temperature .

Once its time, the chicken is removed from the grill and checked with a thermometer inserting it into the fleshy part of the chicken, to verify that it has reached 180 ° F.

Then,  all the bacon is removed from it, the sticks are thrown away and the bacon is blended added to the pot where the remainin juices were left.  The juices are let to sit for a while until they have reached a sauce texture. Et voila !!!  Enjoy this delicious smoked chicken .

Some things to have in mind suggested by the Grill Boys:

Sorry, the comment form is closed at this time.